Bentonville Ice Rink and Splash Park is sited on a half block site located between the Bentonville Square and Compton Gardens.  Compton Gardens is a pristine wooded park that serves as the pedestrian approach to the Walton Art Museum.  The Parks Department program included the concept to provide a pedestrian approach from the Bentonville Square to the Walton Art Museum. The access through the ice rink / splash park was a major consideration.

The site is bisected by an angular walkway that opens to Compton Gardens. A small amphitheater is located on the northwest corner and the ice rink / splash park and support facility is sited on the south west portion of the site.

The charge to the Planners, Architects, and Contractor was to save all the existing trees. Grading was carefully considered with a six to eight foot fall across the site. The use of natural landscaping was chosen and seasonal flowing was a goal to provide color throughout the year. Limited parking is provided on the periphery of the site.

Numerous design schemes were studied from very traditional to a blend of contemporary regional. The materials and colors were chosen to match the pallet of materials most often occurring on the City Square.

The mechanical system was the most critical element of the success of the project. The City wanted to start making ice in November and extend the season to March. We found that we were designing a most unique facility when we started researching the requirements. Since the ice rink would function as a Splash Park in the summer we would be building a slab that would need to provide drainage and contain the water from beyond the Splash Pad. The slab contained all the Freon lines, drainage lines and splash pad supply and drain lines as well as a myriad of reinforcing steel since the 6,000 square foot slab could have not expansion joints.

Sidebar: A world class 21c Museum Hotel with the RED PENGUINS Original is in Louisville is now being constructed on the south side of the Ice Rink / Splash Park. 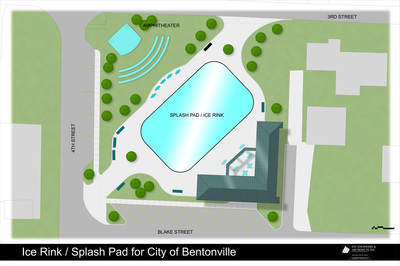 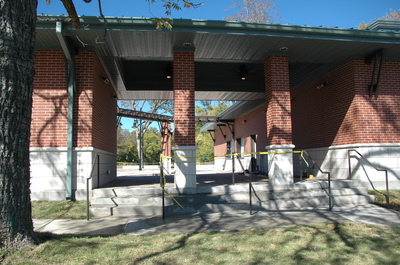 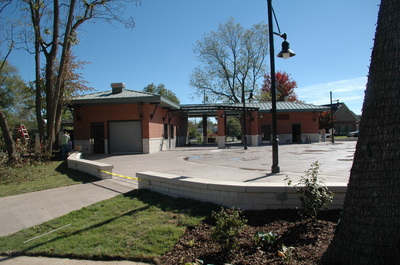