Bella Vista was the first major successful retirement community in Arkansas.  Bella Vista was developed by Cooper Communities.  The best move the developer made was to commission Fay Jones to design the Club House and start development with a signature building.  The Club House with its stone columns and sweeping roof lines clearly influenced all the buildings and homes that were constructed thereafter.

The drawing is the first drawing that I did for Fay on my brief stay in Fayetteville before my National Guard Unit was activated for the Pueblo Incident during the Vietnam War era.

I had the opportunity to work with Fay several years later and have good memories of the experience.  Several projects are listed in the compendium of my Fay Jones Work Experience. 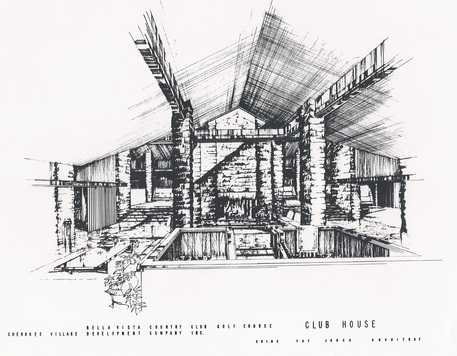